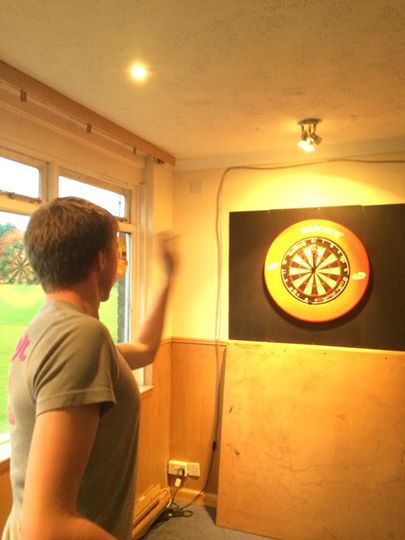 Since my last edition the weather has taken a turn, with only one game in the last 4 going the full distance.
The first ended in a narrow defeat to Corstorphine on the ‘D/L but not D/L method.’ The second game only saw a very poor 9 overs from the boys at home to Grange. This result proved to be a stumbling block, not on the pitch, but off it as we had planned a team night post match. With the game being officially abandoned at 3 the question was – start now and not make it in to town or give it a while and be able to make it into town?

…the latter option was taken and a big night was had by all. The evening ended in similar fashion to other team nights out with Grant Davidson inviting the boys round as well as the ‘neighbours’ from downstairs. However there was a miscommunication as senior players K Steel and Taylor were sold a dummy by the youths and went to the Cash household at Fairmilehead, a long way from home!

Rumours are floating about that there was great debate between C Cash and the local Penicuik fillies about how to carry ones persona with comparisons being made to Jennifer Anniston. A special mention must be made to Grant as he has joined the good blokes in the club and found himself a young lady, the rest of the boys and most importantly his father, look forward to seeing her up at the club in the future.
The following week saw the boys at home to Edinburgh South which could prove pivotal in the outcome of the season. While the boys were scoring runs aplenty I was sunning myself in Tenerife, taking my 1 Saturday off for the season, and offering the boys a chance to provide competition for the batting trophy!
Using the powers of social media for score updates, when I heard that the boys had scored 262 I thought I could enjoy the rest of my afternoon. However whilst looking for the result I found that the visitors needed 5 an over with 5 wickets left in hand, step up Callum Steel who tore through their bottom order to seal the 20 points by 9 runs.

The headline ‘Men of Steel’ was used by the Sunday papers highlighting to personal bests by the Steel brothers, figures of 5-18 meant Callum will be the first recipient of a Penicuik ‘baggy’. Brother Kris scored his highest league score for the club with 94 joining myself in ‘jug avoidance’ club this season. This was not the only PB’s for the Steel family with Karen behind the bar reporting record sales of vodka nips from Steel senior, a proud weekend indeed for the Steel family.

Last weekend’s game against Carlton was rained out without a ball being bowled and only Chris Ashforth venturing out of his bed and attending Grange Loan.
This weekend sees the 1st XI welcoming West Lothian to Kirkhill which should prove to be an enjoyable occasion on and off the pitch.

The boys will be without the ‘Men of Steel’ for the game as they are both on lads holidays, Kris showing his lads holiday experience by only going for 1 week whilst brother Callum has made the bold move and gone for two weeks, time will tell regarding this decision.

The boys are looking to head to the Fringe this weekend to learn a bit of culture but Sean Taylor and James Scott have already ruled themselves out due to the £3.80 a pint price tab and the lack of available quizzes respectively. Looks like it could be down to the Edinburgh boys to represent the ‘cuik at the Fringe.